Calgary-based Structure Cycleworks started as an accident - a biking accident, that is. Founder Loni Hull was out mountain biking one day when he grabbed a handful of brake that sent him flying over the bars, leaving him with a broken collarbone, a concussion, and a mission to design a new kind of mountain bike - one that could separate steering, braking and suspension forces.

An engineer by trade, Loni drew on his motorcycle design background and spent the next few years creating and testing prototypes that eventually evolved into the SCW1 - the world’s first ever fully integrated, front-rear harmonized linkage carbon fiber mountain bike frameset.

Structure’s tongue-in-cheek “WTF” name for their linkage suspension system is a cheeky nod to people’s first reaction when they see their bike’s unique design. It actually stands for “Without Telescoping Fork,” and refers to the front linkage system where a traditional telescoping fork would normally be.

The WTF suspension system provides 40% less suspension dive under braking than a telescoping fork, which leaves more travel for bump-handling, even when the front brake is fully applied.

WHY STRUCTURE & WHY NOW?

Front linkage forks have been tried before - so what makes the SCW1 stand out?

Actually, quite a lot. While several companies have manufactured aftermarket front linkage forks, no one has ever fully integrated balanced front and rear linkage suspension into a complete bike. Structure has been able to solve issues that have typically come with the add-on linkage forks of the past - issues like specialized parts that are difficult to service, heavier weights than telescoping forks, and inconsistent performance with different frame geometries.

Structure wanted their bikes to be serviceable at any bike shop, so they used large, proven, industry-standard bearings that are already commonly found in current rear linkage suspensions. Anyone who can service a rear shock can service the front of the SCW1, and the parts needed are usually stocked by your average local bike shop.

Because the SCW1 is an entirely carbon frame that was designed around the dual linkage system, instead of just an add-on aftermarket fork, the design team was able to keep the total weight of the bike at about 31lbs - which is smack in the middle of the industry average for comparable enduro bikes.

Designing a complete bike also means that Structure is able to adjust the location of shocks and pivots between frame sizes to make sure there is no performance discrepancy between sizes.

Another difference between the SCW1 and linkage forks of the past is that Structure is using the exact same shock in the front and rear suspension. By doing so, they are ensuring an even distribution of forces throughout the system that means no single component takes maximum abuse. They’re so sure about the longevity of this bike that they offer a lifetime warranty on the frame and bearings for the original owner.

Unsurprisingly, Structure’s unique design has gotten a lot of attention. When Structure rolled out an early prototype at Crankworks Whistler in 2017, Bike Rumour called it the “most interesting bike at Crankworx.” Pinkbike wondered whether mountain bikers would be accepting of the design, but reported that they wouldn’t be “the least bit surprised if and when the 150mm-travel SCW-1 comes out and really does blow current bikes and suspension forks away.” 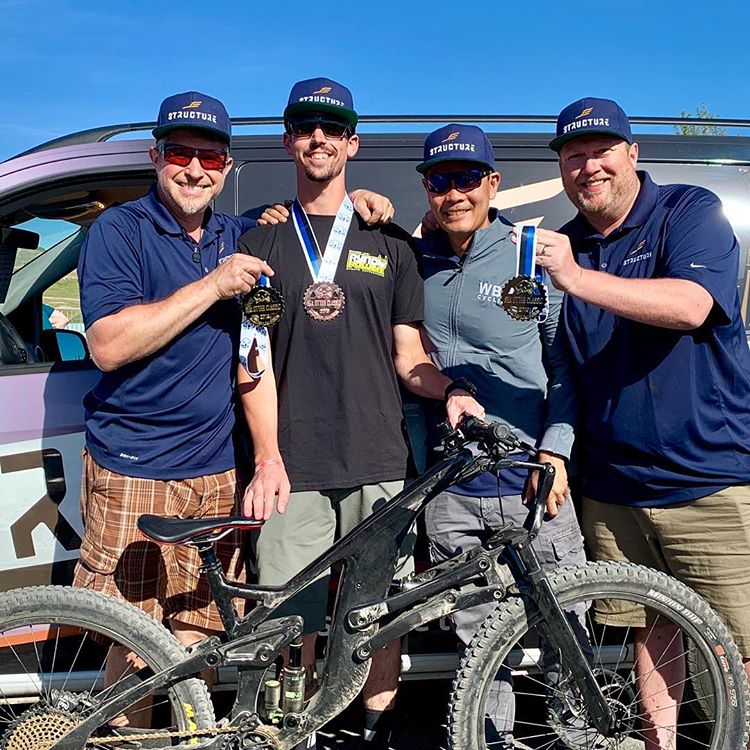 Well, the 150mm-travel SCW1 is here and doing exactly that, recently blowing minds this past April at Sea Otter, where Structure convinced two racers to swap their bikes out and try racing on the SWC1. In a MTBR forum, Structure divulged the impressive results:

“Dave [Smith] rode the same bike in both the slalom and downhill. He won gold in the slalom and silver in the downhill. Perhaps just as significantly, Dave shaved 7 seconds off of his previous best-ever slalom time (Strava-verified) and beat a good friend who has edged him in the slalom for 15 years.

On a separate bike, Ryan Sullivan won bronze in the Cat 1 pro-am downhill. Both of the guys had about an hour on the bike before they won.”

With more demos happening right now at Crankworx Whistler 2019, we’re sure to be hearing even more buzz about the SCW1 in the coming days.

Earlier this year, GearHub’s very own Mark Hall had a chance to test one when Loni rolled through Fernie with an early demo.

Mark’s take? “In 25 years I’ve been around for all the major changes that the mountain bike industry has gone through. My first impression of the SCW1 was, here’s another weird one. But the more I talked with Loni, I could tell he really knew what he was talking about from an engineering and design standpoint. And when I tried the SCW1, I was blown away. It was so smooth - zero fork vibration, zero feedback from stutter bumps, and the fork felt more supportive than any traditional fork I’ve ridden. The 150mm of travel felt more like 170-180mm. This bike was really different from anything I’ve ever tried. It was amazing.”

In fact, Mark was so impressed that he put in an order for some of the first SCW1s in Canada so that everyone in Fernie demo this amazing new bike. These 2020 bikes will be arriving at GearHub in the fall - so stay tuned!

In the meantime, we want to know what you think? Is front linkage the future of suspension? Is the unique look appealing, or too weird? Will you be in line to ride a demo when they arrive? Let us know in the comments below. 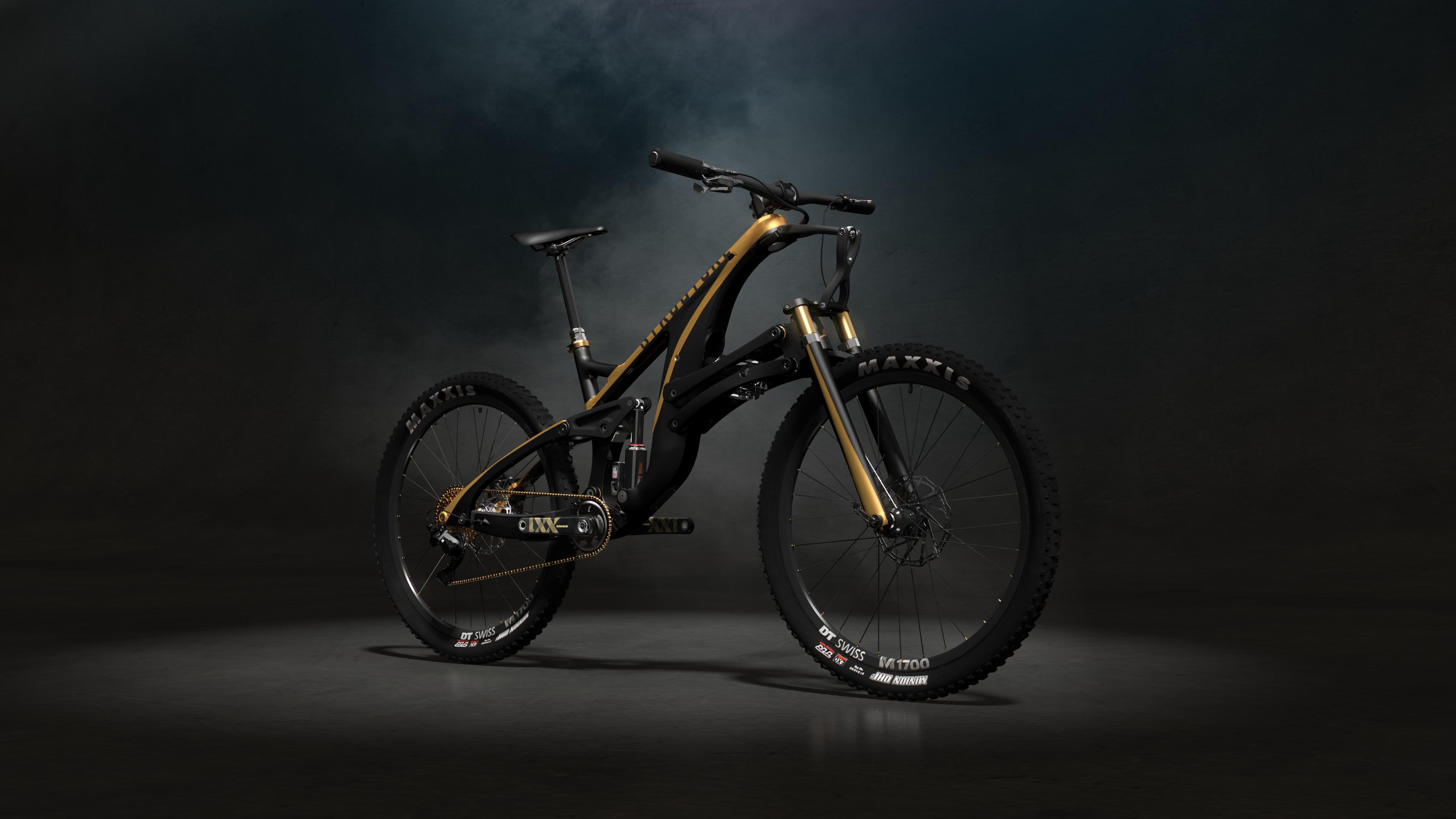